Great music radio has great music flow. How do you sound both amazing and increase TSL? That’s where super song segues come into play!

A segue — from the Italian segue [se:ɡwe], which means ‘follows’ — is what Wikipedia calls ‘a smooth transition from one topic or section to the next’. Segues are obviously important in a PPM world, where you want to keep things flowing and avoid sudden changes or perceived breaks (plus consider attention spans; presell what’s coming, go there quickly, and make it worthwhile). Some ideas to optimise music scheduling for more forward momentum and longer Time Spent Listening on your music radio station.

Pleasing the majority of your audience most of the time 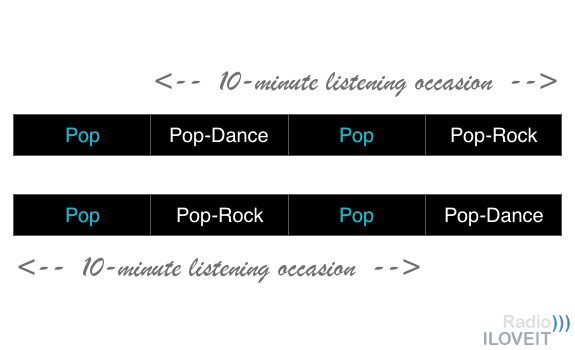 Before covering gender, tempo, energy & mood in music transitions, let’s look at the all-important genre factor, as music flow is partly achieved through music variety. One of the benefits of radio, compared to music collections and streaming services, is the surprise factor, leading to curiosity and anticipation (contributing to forward momentum). Variety is also key to satisfy every music cluster (taste group) of your target audience within any given segment of 10 minutes; the average listening occasion time in many markets. In any case, you want to reflect your station’s entire music format in less than any random 20 minutes (again, 10 is ideal), keeping in mind that longer commercial breaks will be like pushing a reset button. After a long stopset, you basically start all over with a mostly new batch of listeners.

If you’re an AC station, and a mapping study tells you that one half of your target audience is into Pop, and that the second half consists of equal amounts of Rock and Dance fans (for the sake of an easy example), then you’ll probably build a music library based on 50% Pop, 25% Pop-Rock, and 25% Pop-Dance. You’ll probably avoid heavy Rock or extreme Dance songs, keeping your Pop music core happy with mainly Pop-leaning Rock and Dance, while giving Rock and Dance fans some of what they want as well. However, building a library where you not only include the right (good-testing) songs, but also have the right genre percentage in each song category (also based on how many slots for each category you have in your format clocks) is one thing. Scheduling those songs in the right order is another.

When your music strategy is playing 50% Pop, 25% Pop-Rock and 25% Pop-Dance, you may not only want to hear that 2:1:1 ratio in each hour as a whole and, as explained, in a given 10-minute segment — or, in this case, a given 15-minute music segment as you need 4 songs (of about 3.5 minutes each) to reflect a complete 2:1:1 format. You also want to play those 4 titles in a certain sequence, pleasing the majority of your audience most of the time. Instead of:

you obviously want a strategic music genre flow like:

to please your music core at least every second song, no matter when they tune in, keeping that essential part of your audience hooked for as long as possible to boost your Time Spent Listening and (with frequent tune-in appointments) grow your ratings. But there’s a paradox.

Unbreakable rules are perfect to separate music genres that do not appeal to the majority of your audience. 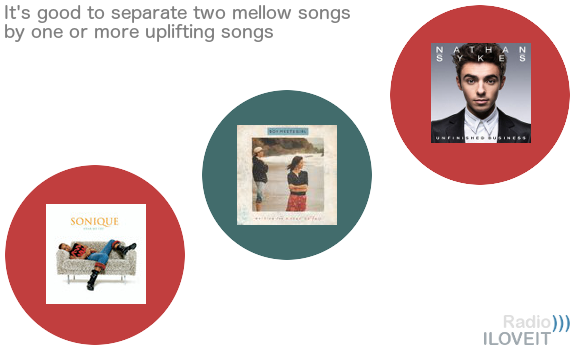 While variety creates flow, it also contradicts flow. Especially when you program a broad, mainstream format such as AC or Top 40, you’ll sometimes have to play two less compatible records back to back, like transitioning from a soft & slow ending Pop song to a powerful & uptempo starting Rock or Dance track. Unless you have a jock talk (or other break) in between two very different songs, you can use (PPM-friendly) station imaging to make good segues. I’m not talking about classic transition jingles (long sung themes with a break in the middle, where they’re morphing from like Rock to Dance, and/or from like slow to fast) necessarily. It is possible, when these jingles are well produced (and correctly used), but if you want to use sung imaging to connect two songs, you’re usually better off with short versions like Shotgun IDs, or (partly sung) power intros a.k.a. branded intros. Non-musical elements, like sweepers, are great as well.

You can produce multiple versions of every sweeper, using a Beats per Minute grid (such as a click track in Pro Tools) to put your voiceover parts rhythmically on the beat before adding impacts & whooshes to glue everything together (and muting your click track before rending your audio file). Once you’ve added your sweepers to a Sweeper category in your music scheduling database, and tagged both your sweepers and your songs with a BPM number, you can define rules in your music scheduling software to mix & match songs and sweepers. Add your jingles to a Jingle category, treating them like songs (as jingles are musical elements) with codes for genre and tempo. Define these codes for both the intro and outro of your jingles, so you can create perfect transitions. When you’ve conscientiously entered song and imaging intro & outro times in your scheduling software — and carefully entered start & end cues for all songs and imaging in your automation software — you can, after some testing and fine-tuning, enjoy a great song-to-imaging-to-music flow.

Before you start (re)coding your songs, ideally done by one and the same person for consistency reasons, you want decide which sound definitions really matter to you(r audience). For most music formats, relevant sound codes are:

Your music scheduling rules (based on chosen sound codes) could be set to ‘breakable’ first, maybe except for your (usually unbreakable) Daypart rule, and then switched to ‘unbreakable’ one by one (for rules that make a difference). Unbreakable rules are perfect to separate music genres that not appeal to the majority of your audience. If you’re an AC station with a Pop core, you may want to avoid two Rock or Dance songs back to back, or more than two level-1 or level-5 songs in a row (or a sudden jump from a level-1 to a level-5 song without a level-3 song in between). But it would be acceptable (yet not perfect) to play two Pop songs, or two level-3 songs, after another. You can tweak your sound code matrix by scheduling test logs, and making necessary adjustments.

However, many level 2 or level 3 songs could have been better spread across the hour, considering the fact that some of them have been scheduled close to each other, while there are many level 4 or level 5 songs in a row (image: Thomas Giger)

Above, you see a random hour on a major-market AC station, so we have a nice case to analyse song segues from a sound code perspective. Therefore, I have left rotation-based categories such as Currents, Recurrents and Golds, as well as station imaging, out of this analysis. Looking at the ‘Genre’ column above, the station’s main music clusters seem to be Pop and Dance in a ratio of almost 2:1 (9 songs versus 5 songs). Seems like there’re no real Rock or Urban on the playlist; no surprise for Adult Contemporary formats. But considering how these Pop and Dance songs are positioned, this station could define rules to achieve an even better genre flow throughout the hour, as we not only see 3 Dance-alike songs back to back, but also 6 Pop-based songs in a row! Even if Pop is likely the station’s music core, and even if there are many sub genres within Pop (as we see in the third column) to create variety, an even better music flow could be:

Of course, as Currents and Recurrents have higher turnovers than Golds (especially when they’re powers), they have to play at certain positions to maintain excellent rotation patterns, but you can use your secondary Recurrents and Golds to balance your genre exposure. The side effect is automatic ‘platooning’ of your back catalogue if your front catalogue is influenced by music trends. If today’s music cycle is Pop, many of your Currents & Recurrents will be Pop-based, thus you’ll rely more on Dance- and Rock-sounding songs in your Gold categories, causing your Pop-sounding Golds to play less often. Solution? Leave your Power Gold category as it is, so you’re still playing the best-testing Golds. Rebuild your Secondary Gold library by testing some Dance- and Rock-feeling classics to qualify for your Secondary Gold segment, making that category appear a few times an hour (close to your Power Currents and Power Recurrents). Important is that your Power Golds are still playing as often as they should.

Four females and four males back to back (see ‘Gender’ column) can be solved by tightening your gender separation rule. First, make small, step-by-step adjustments, like taking it from ‘maximum 4’ to ‘maximum 3’ males or females in a row. Run a couple of test logs. If it works, you can try ‘maximum 2’, as long as your rotation patterns remain intact. The music mix is powerful, upbeat and positive (with average levels of 3.9, 3.6 and 3.6, so basically 4, 4 and 4). Within this context, it does feel a bit off to start with a ‘3-3-2’ song after the Top of the Hour. The ‘Mood’ rules could be adjusted, so that lower-level songs are more embedded within higher-level songs (of which we’ve seen eight in a row in that hour). A good rule is to always follow a low-level (1 or 2) song with a higher-level (3 or 4) song, like this station seems to be doing well. Music scheduling is also ‘mood management’. All of these factors combined could give you a better sound, and a longer TSL. Have fun optimising your music flow, and creating super song segues!