Pushing boundaries of programming fundamentals, and having success since many years. How does BBC Radio 2 make the ‘impossible’ possible?

At Radiodays Europe 2017, BBC Radio 2 and 6 Music’s Head of Music, Jeff Smith, shared unconventional ways to develop a music image. About 15 million listeners with hardly any research, genre breadth and library depth instead of tight rotations and small playlists, and controlled anarchy instead of music direc(dicta)torship. “Radio 2 can play anything.” 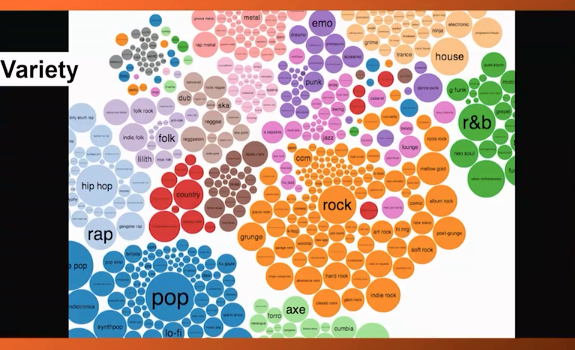 With 15 million listeners a week (28% total reach, 17% market share) according to RAJAR (Q4 2016), BBC Radio 2 is the number 1 station in the UK. It has an annual budget of £45m ($58m), and offers a Full Service format. It is home to highly regarded radio personalities, from Chris Evans and Steve Wright to Johnnie Walker and Tony Blackburn, and has a music policy that Smith describes as a combination of many formats: “AC; Triple A; Soft CHR… A Little Bit Country; A Little Bit Rock and Roll, as Donny & Marie might say.”

Radio 2 demonstrates that a station can be successful by going broad, but especially by being different. “We go through about 600 different songs per week in daytime. I think that’s four times what an average commercial station would deliver.” Here’s a random sample of BBC Radio 2 music logs in early 2017.

The format covers many eras, but does have a common denominator; it’s based on “timeless, melodic” works. The music director expects that current hits from Katy Perry or Ed Sheeran from the above collage can still be played in two decades. With a playlist going back as far as Judy Garland’s Get Happy from 1950, the format clocks are based on eras, so all periods can be exposed in the right proportions. They focus on a 35+ audience. “50-year olds had their teenage years in the seventies and eighties, and 35-year-olds in the nineties. We’ve got to move our music all the time.”

BBC Radio 2 has between 1.500 and 2.000 songs in active rotation at any given time. “I’ve got a core database of 15.000, so I’ve got to move things around a lot”, he says in reference to platooning (taking certain songs out, while putting other songs in that have been resting for a while, often on an ongoing and regular basis to maintain a feeling of freshness). He goes through all categories every couple of weeks. “Recently, we’ve seen that within our ‘35’ audience, we’re not doing as well as we could do, so we’ll pop in some interesting nineties records that you haven’t heard for a while on the station.”

Apart from many eras, they also cover many genres. Instead of variety, a classic radio term, Smith talks about breadth. “We need to show, as a public service station, that we are encapsulating all of this.” The station also challenges another established radio programming law; that of choosing one format and running it 24/7. “We have a tremendous range of specialist programming. Country, Folk, Blues, Jazz; we can represent that. Not all of those have great popular hits off the back of that, but we try and play those, and mix them with new artists in those directions. So, the flow is driven out of those eras we talked about, and this range of music.”

“Controlled anarchy” is how he calls Radio 2’s music policy. “The perception from the audience is like it used to be; that the deejays choose all the tunes. That’s how, I think, we make them feel. In the end of it, we do it between us. A big word that I use in this is trust; between the management and the presenters and producers. They will play the playlist records; they will play particularly strong songs in particular parts of the hour.” As 51% of their output is speech-based, he finds it important to play a strong song when going back into the music. A benefit of personality radio is that you can play a wide range of genres more easily. Many songs will be separated by a longer jock talk, so they won’t play back to back.

“RADIO IS GONNA’ BE GOING THROUGH A NEW GOLDEN AGE” 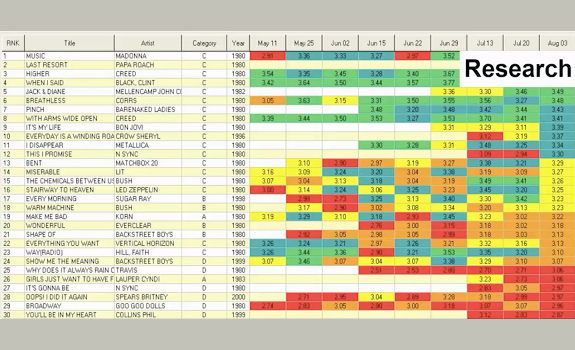 A good question from session host Nik Goodman is whether radio programmers are sometimes too obsessed with decreasing variety and tightening rotations when competing for ratings. “I totally get why people would work from a smaller repertoire of music, and a tighter sort of format”, Jeff Smith says from his CHR background. During the nineties, he was music director for BBC Radio 1, and before that for Capital FM and Napster. He thinks that BBC Radio 2 and 6 Music need a different approach, although “it’s quite challenging to kind of let go“.

“I was the first to bring music research into Radio 1 in 1997; we brought in Selector into Radio 1 in 1995. We did all those things that commercial radio subsequently does, or did, or has done. But what you have to do is horses for courses; you have to develop a format and a way of managing programming according to the situation you find yourself in.” They now schedule with Powergold. A multi-user license allows all producers to access the software, and to make changes to the prescheduled log. The producers & presenters and music editors will then together sign off on the final music log.

From musical breadth to musical depth. Airplay data show that recently, in one month, the station played 19 different ABBA songs. Most of them once; a few twice. Conventional music directors would play less songs on a higher rotation (like only the 5 best-testing ABBA songs, 5 times a month). “Part of it is: we don’t research the tracks. We’re not gonna sit there, thinking: ‘What’s the best ELO track? Mr. Blue Sky. So we’re gonna play Mr. Blue Sky all the time’. Although we do play Mr. Blue Sky.” Every couple years, they will do music taste research to find people’s favourite genres. But that’s about as far as their music research currently goes. “I like data, but I’ve always believed in the educated gut.”

Smith is using Radio Monitor to see what other stations (who often do research) are playing, assuming that every song they schedule is testing well. But he mostly relies on the experience of his music team (consisting of 4 people, including him) along with the station’s producers & presenters to discover new songs, and to develop the gold repertoire together. His advice for fellow radio programmers and music directors is to give unfamiliar songs, which may not immediately test well (as listeners haven’t had a chance to form an option about those songs yet), some time. “That will come around, if you believe in that record”, he says while touching his belly.

As a public broadcasting organisation, they are required to be distinct. He admits: “If we were commercial, we might not necessarily do that, but because we’re not so bound up by our numbers, we’re able to dig deeper.” In his experience, BBC Radio 2 listeners actually expect this musical breadth & depth. “With our average age being 51; 52 years, a lot of them know this repertoire, so [even margin records] feel like hits to them anyway.” While realising he’s in a different position than most MDs of commercial stations will be, he feels like radio can be “a little bit braver” in terms of curation.

“Radio is gonna’ be going through a new Golden Age, and whether it’s disintermediated into the whole podcasting or streaming or playlist thing, one of the great things we can do is show off the range of music, and surprise people.” Jeff Smith thinks that today, music programmers get away with it easier than they used to. “There’s a demand for something different out there on the radio; something a little bit more challenging.” Being an established brand helps as well. “I think Radio 2 can play anything, as long as we bring [listeners] back to a timeless, melodic, broad range record.”

ROTATIONS RELOADED: IDEAS FOR MUSIC VARIETY DESPITE A TIGHT PLAYLIST